02/12/2021 196 0
Cao Lan people in Kim Phu commune (Tuyen Quang city) still retain many unique traditional cultural features, which is an advantage to build and develop cultural villages associated with community tourism development. This is not only a new direction for people to increase their income, contributing to promoting the city's tourism economic development, but also a positive solution to preserve and promote the traditional cultural values of the city. Cao Lan ethnic group.

Cao Lan ethnic people in Kim Phu commune (Tuyen Quang city) today still preserve 2 communal houses, Dinh Gieng Tanh and Go Danh communal house with traditional cultural festivals, rituals, and folk games. interesting as: leveling, tossing, jumping fire, pushing sticks... The two communal houses are considered by the Cao Lan people as their "spiritual spirit". Previously, it was a place for spiritual activities and cultural activities of the Cao Lan ethnic group within the village. But now, due to the cultural interference, this place has become a common place for cultural and spiritual activities of people of all ethnic groups living in the commune and neighboring areas and communes. Gieng Tanh Communal House has been recognized by the Provincial People's Committee as a provincial-level "Architectural and Artistic Relic" in 2007. Here, there is also an ancient well called "Geng Tanh" but the word "Tanh" according to the call of the Cao Lan people. means pure, pure. This well also has many very sacred and thrilling spiritual stories.

Currently, the City People's Committee is developing the project "building Cao Lan ethnic culture village" associated with the development of community tourism in the villages: 12, 13, 14, 15 of the commune. In the Cultural Village, many unique traditional cultural features of the Cao Lan ethnic group are preserved such as: customs, practices, houses, language, writing, costumes, cuisine... Currently in the village there are 80 households still keep their traditional stilt houses, including 25 original wooden stilt houses, 55 concrete stilt houses built according to traditional architecture. People still maintain, keep and use traditional costumes in festivals, Tet and other important days; There are still traditional Sinh ca tunes that have been recognized as National Intangible Cultural Heritage and traditional dances such as: Sausage shrimp, woof bird or many unique traditional dishes imbued with cultural identity. ethnic culture such as: black sticky rice, vermicelli, young corn sticky rice, ginger leaf sticky rice, five-color sticky rice, dad's banh chung, mom's banh chung. The writing and voice of the Cao Lan people are also continuing to be preserved and preserved through transmission in their families, clans or through activities of Sinh Ca cultural clubs. 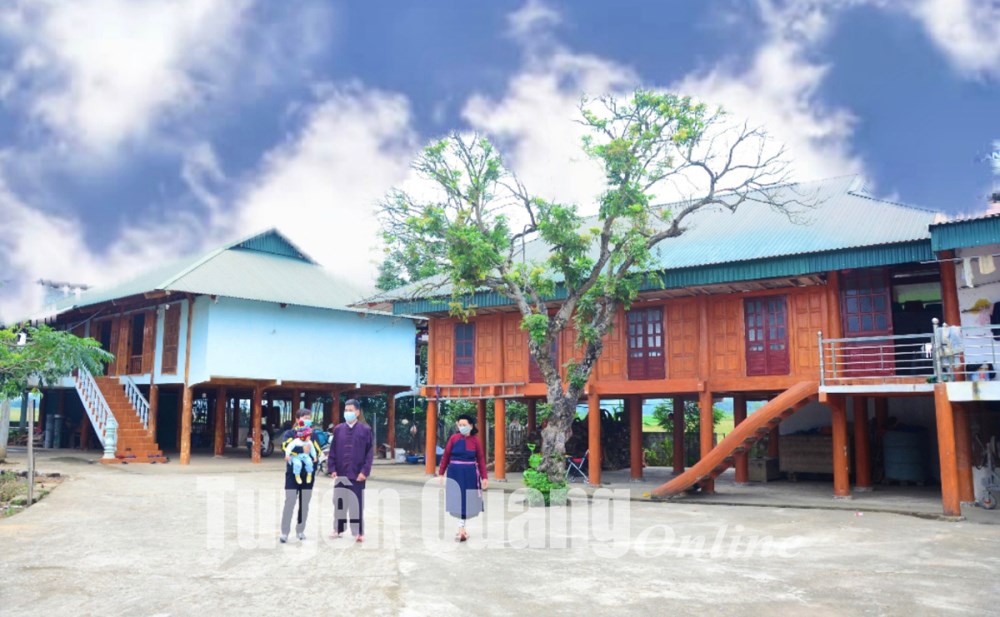 One of the more advantages is that since 2016, in the commune, there have been 5 households in village 15 implementing the Homestay model under the Project "Preserving and promoting traditional cultural values ​​of Gieng Tanh Cultural Village associated with sustainable tourism development in Tuyen Quang province". These households have initially attended a training course organized by the Department of Culture, Sports and Tourism and basically know how to do community tourism services. Some households have purchased and embellished the house premises, toilets to ensure conditions for tourists to stay, with the number of guests about 20 people/household.

Comrade Nguyen Thi Viet Nga, Vice Chairwoman of Kim Phu Commune People's Committee, said that over the years, the Party Committee and People's Committee of Kim Phu commune have always paid attention to directing and proposing solutions to preserve and promote the local culture. ethnic culture in the area. Since 2014, the Commune People's Committee has coordinated with mass organizations to propagate and mobilize to establish a club to preserve cultural identity of the Cao Lan people in village 14, and a Sinh ca arts club in village 15. Each club maintains from 15 - 20 members, activities 1 time/month. Members of the clubs have a wide audience, both the elderly and children. The "child" members are handed over the dances and songs of the Cao Lan people by the old men, women and club members, etc. The clubs regularly participate in cultural and artistic exchanges in the associations. contests, exchange programs, holidays, Tet, big and small anniversaries in villages, communes, cities and provinces. Along with that, the commune regularly propagates and mobilizes people to wear their ethnic costumes on holidays, Tet, and major festivals of the country or the locality.

In order to proceed with the construction and implementation of the project of building Cao Lan ethnic cultural village in association with the development of community tourism in Kim Phu commune according to the policy of the city, the Party Committee and People's Committee of the commune had working sessions, exchange with people in 4 villages, propagandize and mobilize for people to understand. The commune mobilizes households to have a sense of preserving and preserving the original items and costumes of the Cao Lan people, keeping the original traditional stilt houses; mobilizing households to build new houses on stilts, practice a civilized lifestyle, protect the environment, unite, and decorate the house premises... People understand and agree to support when implementing the Project judgment. However, to build a Cultural Village is still a long way with a lot of work to do.

Mr. Hoang Lien Son, the owner of a Homestay household, shared that his family is one of 5 households that have performed the first Homestay service in village 15. Since 2016, his family has also decorated their house, bought new items. living utensils to serve when guests stay. However, since then, his family has only received 2-3 groups of guests to stay on the occasion of Thanh Tuyen Festival. Guests come in groups of about 20 people, mainly university students. There are also foreign guests but go alone. Guests come here mainly to sleep and rest at the price of 50,000 VND/person/night. Food service at home for large groups of guests has not yet been met. Groups of guests often choose to eat elsewhere. Due to not being able to organize activities to experience cultural identity and not have beautiful places to take souvenir photos, it has not been attractive to attract tourists. Therefore, the source of income from services is not significant.

Vice Chairwoman of the Commune People's Committee Nguyen Thi Viet Nga added that in order to carry out the construction of the Cultural Village in the near future, Kim Phu commune will still have a lot of work to do. The commune wishes to receive financial support from the State and businesses to build and expand inter-village and inter-commune concrete roads to facilitate travel and welcome tourists. Besides, it is necessary to renovate and upgrade the campus of Gieng Tanh Communal House, Go Danh Communal House; support homestay households to build, decorate their houses, invest in purchasing equipment to serve guests... The commune also needs to build traditional craft villages; places for entertainment and sports training for people in the village and for tourists; Build flower lines, create attractive recording points, take photos. The building of houses to display and introduce souvenir products, typical cultural products of local ethnic minorities; Construction of parking lots is essential. The commune will also orient the people to diversify types of tourism and experience products of the Cultural Village; training and improving the quality of human resources serving tourism on the spot. Especially promoting propaganda, advertising and tourism promotion, in which it is necessary to build a map of cultural and tourist villages, build billboards, tourist signposts and more importantly, build build and connect tours and tourist routes with other localities inside and outside the province.